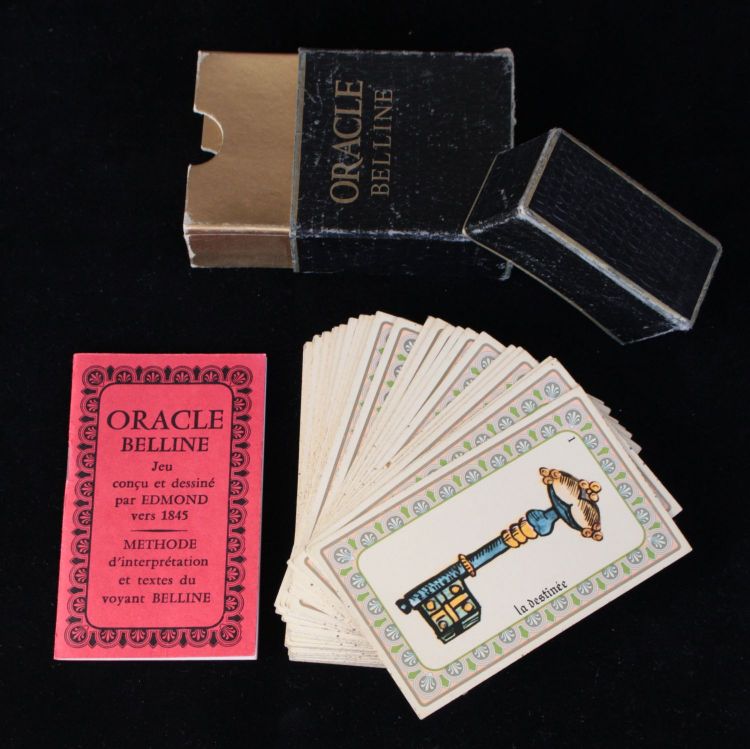 Please note: this review is based on material in French. This does not change the content of the review in any way, as the material is identical in both languages. Sorry I can't systematically offer me my tarot cards and books in both languages (I don't receive any gifts from the publishers) ! ^_^

The deck, the subject of this review, was edited and printed in 1961. Since then, other editions have been published by the same publisher Grimaud. Whatever the versions, the format of the cards remains the same, i.e. quite small. The drawings are also identical, made by the hand of the Mage Edmond according to the legend.

It should be noted that in recent years, more modern versions of Oracle have been released on the market, in particular that of Gabriel Sanchez to the editions EXERGUE. This game offers renewed and up-to-date graphics.

The game consists of 53 cards in the traditional playing card format, which allows a very good grip and easy shuffling.

Marcel Forget, known as Belline, is a twentieth-century seer who practiced from 1950 to 1980. According to his own account, one day he went to a consultant who was moving to retrieve some archives she wanted to get rid of. On the spot, he would have discovered card games and a manuscript that may have belonged to a previous tenant, Jules Charles Ernest Billaudot, better known as Mage Edmond (1829-1881), a 19th century seer.

According to Belline, these cards were drawn between 1845 and 1865 and include a set of symbols for divination. Mage Edmond would have created two divinatory decks :

The booklet is in B&W. The printing and the manufacturing date from another time (1961). One has the impression to have a relic in the hands so much the game smells like old paper.

The content is short and brief. The first two pages narrate the legend of the discovery of the game, which is summarized above. 4 pages are then reserved for the presentation of drawing methods : The Belline method, the first names method, the cosmic number method, the cross method (classical cross spread). Then, the author gives some advice on the practice in 2 pages. The rest of the booklet gives a short meaning in 3 lines for each card of the game.

The composition of the deck

The oracle is a 53-card deck, based on a "septenary" structure (series of 7 cards) inspired by astrology. Indeed, the game is composed of 7 series of 7 cards each. Each series is associated with one of the 7 fundamental planets of astrology (the Sun, the Moon, Mercury, Venus, Mars, Jupiter and Saturn). To these 49 cards are added 4 "neutral" cards (dissociated from the 7 planets) :

I appreciate that an oracle can have an internal structure. Knowing that this is far from being a habit in oracle games, I study more willingly those that have an explicit organization. The fact that the creator of the game has taken the time and made the effort to organize his game is for me a proof of the seriousness of his work. I am not saying that a structured game is more "relevant" than a game that is not. But it seems to me that the assimilation of the game, its study, its memorization are facilitated if the cards are arranged by series, categories or any other system of organization.

The 7 series of the Belline oracle refer to the 7 astrological planets, whose associated themes you will find below :

The science of astrology also integrates the 3 remaining planets of the solar system : Uranus, Neptune and Pluto. They are not part of the system established by the magus Edmond, but deserve to be discussed as well :

First of all we could reproach the author for not having taken into account all 10 celestial and astrological objects to structure and create his oracle. However, we must admit that Uranus, Neptune and Pluto were discovered only in 1781, 1846 and 1930 respectively. The oracle would have been conceived between 1845 and 1865. At the time of its creation, Pluto was still unknown to us, Uranus and Neptune were not part of the astrological tradition. Moreover the names of the 7 days of the week are directly inspired by the 2 stars (Sun and Moon) and the 5 planets (Mercury, Venus, Mars, Jupiter, Saturn) known since antiquity. It seems to me that the magician Edmond drew his inspiration from ancient astrology, disregarding the discovery of the new planets.

About the structuring of the oracle, we can still notice that within the series, there is no organization between the 7 cards. Within each series, the magician Edmond could have attributed a precise role to each card, for example: a "light" card, a "dark" card, a "retrograde" card (astrologically speaking), a "creation" card, a "change" card, a "channelling" card, etc. This double structure (series + role) would certainly have improved the cohesion of his card game. But I do not want to criticize Edmond's work, because at the time, he was indeed the first and only one to have structured an oracle game. Jean-Baptiste Alliette, known as Etteilla, who died in 1791, was content to randomly place divinatory keywords on card games and tarot cards to make oracles. And Marie-Anne-Adélaïde Lenormand, usually called Mademoiselle Lenormand, did the same with her famous 32-card deck passed on to posterity. Edmond can therefore be considered a genius for his time. Moreover, it seems that nowadays the Belline oracle is much more popular than the Lenormand, while the tarot of Eteilla is totally forgotten. So, even for pure prediction, the seers and the public seem to find themselves more with an oracle created and organized around a proven divinatory tradition, than with oracles created in a cookie-cutter fashion.

The only three real criticisms I can make of the author are:

The cards that challenge me

There is no particular reason why "the disease" in the broadest sense of the word should be associated with the Moon. The onset of an illness, whether mental or physical, is not unique to a planet. Put another way : a planet that "retrogresses" can lead to contracting all kinds of illnesses, neuroses, including disease of course, and this is in no way specific to the Moon. Moreover, the Moon and especially its monthly cycle are often related to the element Water and particularly to fertility and fecundity of women (nothing to do with disease). It is a pity that among the 7 Moon cards, none of them evoke this aspect.

The theme of money is only very indirectly related to Mercury. The planet influences intellectual activities and the art of communication. Trade is certainly one of those areas inspired by Mercury. Consequently the presence of money is justified because it is the support of any commercial transaction. According to me, we have here a theme on the periphery of the Mercurian sphere of influence. This choice is emblematic of the state of mind of the magus Edmond who was to deliver a tool of prediction and not a psychological one. And in matters of divination, the themes of love and money are particularly recurrent during the consultations. So Edmond had to integrate "Money" at one time or another in his card game. And he chose the Mercury series with this in mind.

Like the previous card of money, the concept of family is also relatively far from the influence of Venus. The planet speaks to us about beauty in general, femininity, sensuality, and love. So of course we can imagine that behind love, we can link to it other sub-themes such as family. Here again we can perceive Edmond's will to retain a maximum of themes generally related to divination, rather than respecting the themes of the astrological planets as much as possible.

The planet Mars is often associated with war and conflict, even if it is a rather arbitrary and negative view of the main Martian theme which is : "desire in action". We find in the Mars series, the cards "Despotism", "Enemies", "Badness", "Fire" which can indeed be linked to the influence of this planet. However, if the negotiations are obviously reminiscent of war and combat, this card nevertheless speaks to us more about talks, diplomacy and mutual understanding. And it seems to me that these are values associated much more with Mercury than with Mars.

Here I confess that I do not understand the author's intention. The card of beauty (directly related to the theme of aesthetics or even love) is placed in Jupiter, while beauty is the main theme of Venus ... What did Edmond have in mind ?

In Belline's deck, there are very positive cards but also really negative cards, making the oracle very polarized. No doubt pure divination is all the more facilitated (by radical cards) to the detriment of a more nuanced, more psychological approach. Misfortune, a very negative card, has difficulty finding its place in the Saturnian series which evokes the themes of wisdom, structuring and mastery. For my part, I would place the card of misfortune in the series of the sun, because this star speaks to us of glory, success and achievement which, in a retrograde or negative aspect, can certainly lead to misfortune. But the mage Edmond decided very clearly that the series of the sun was fully positive. Misfortune therefore had no place there. 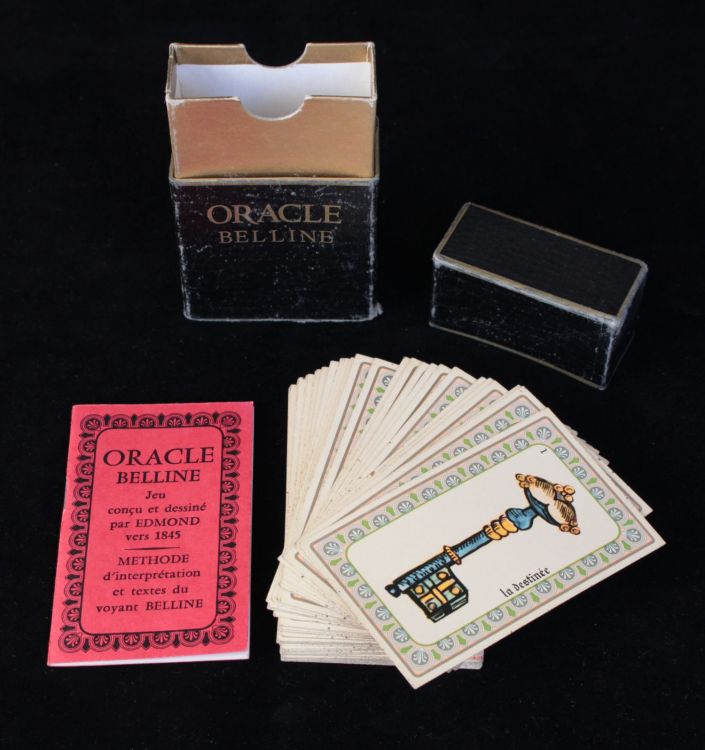 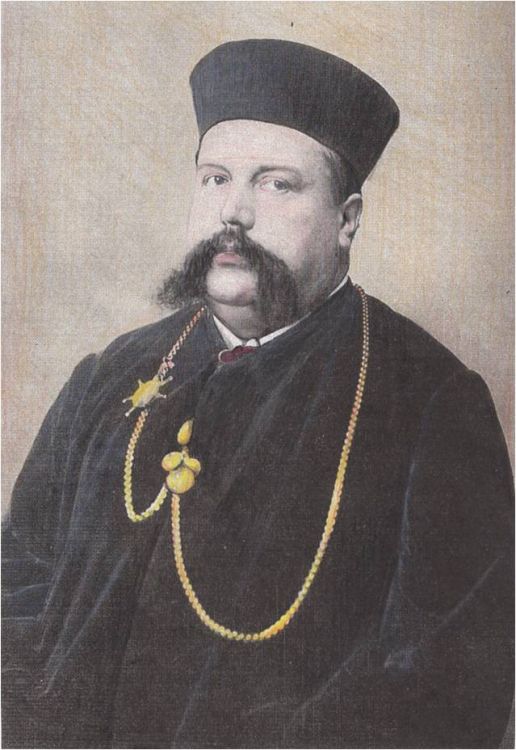 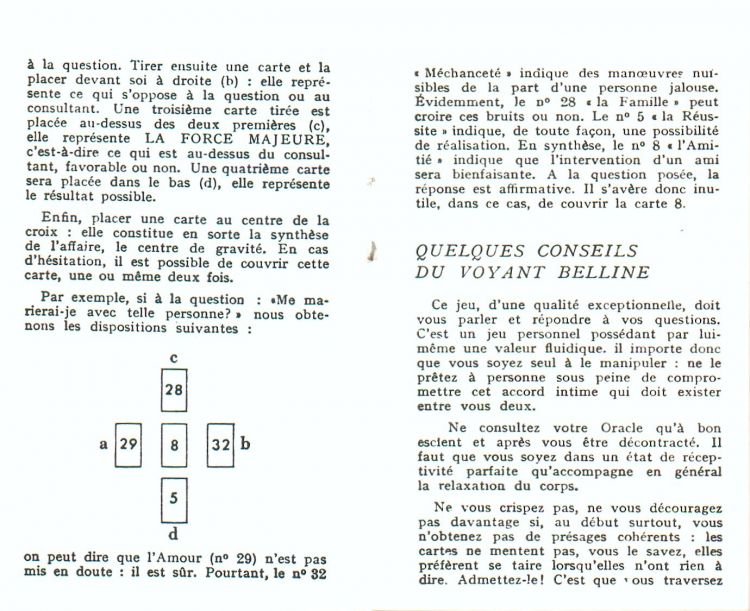 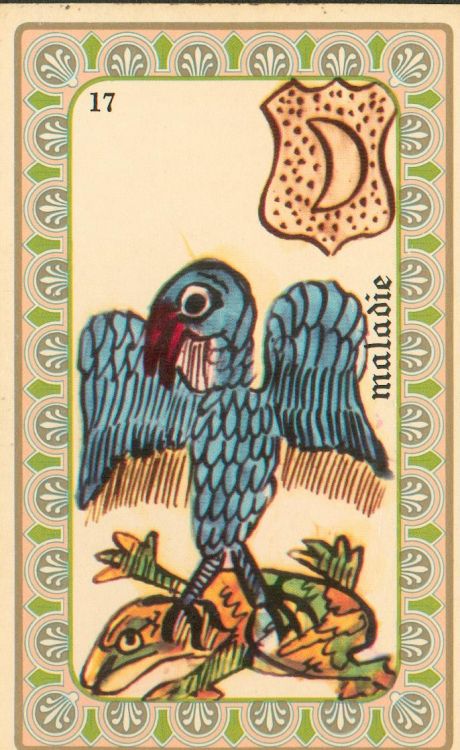 The cards that challenge me 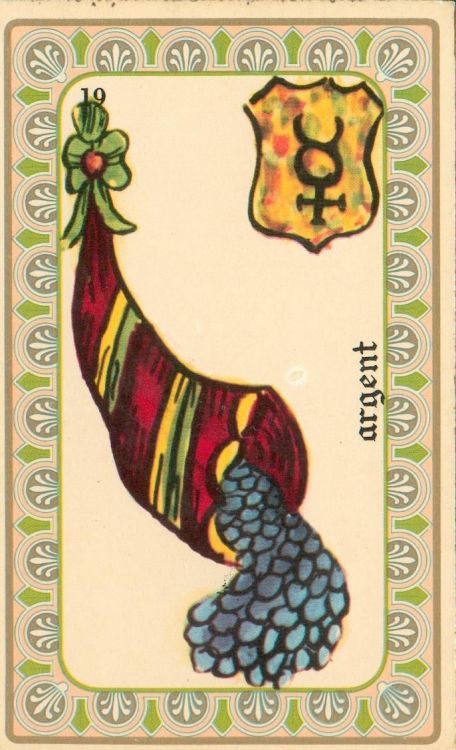 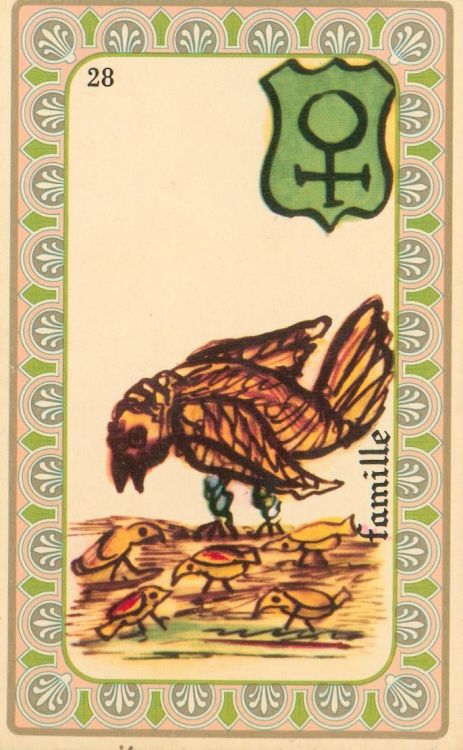 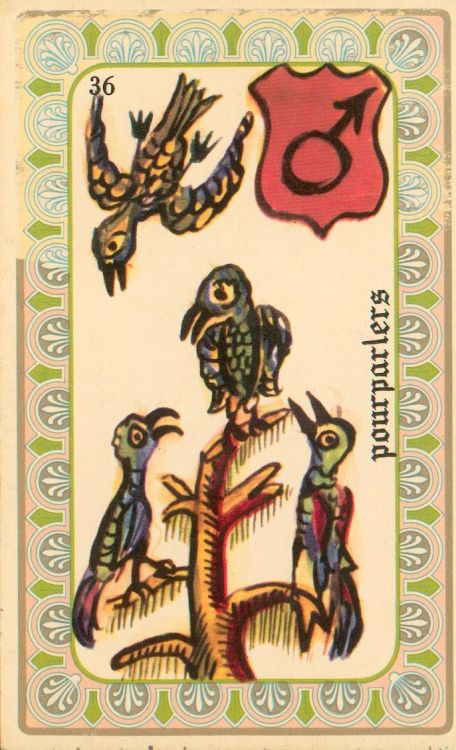 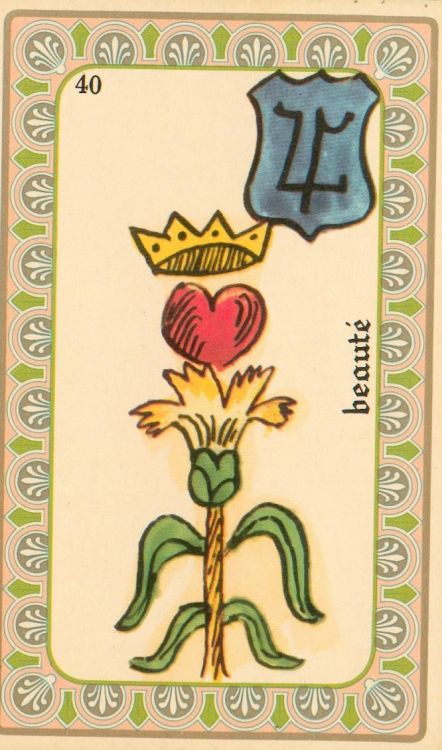 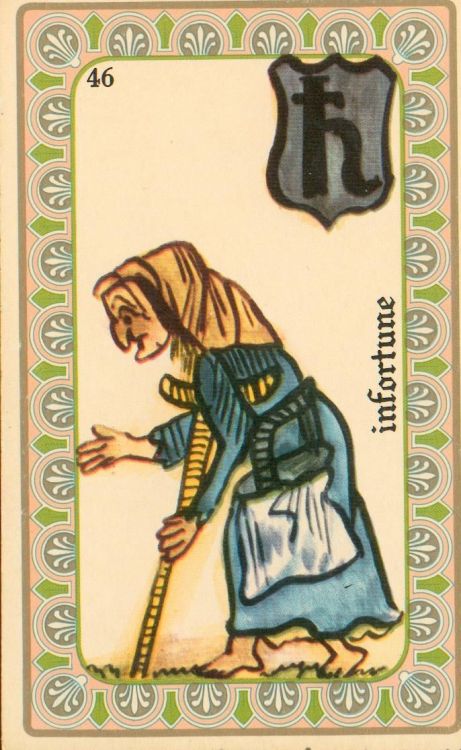 BACK
GALLERY
SHOW ALL oracleback
2 - The man's star 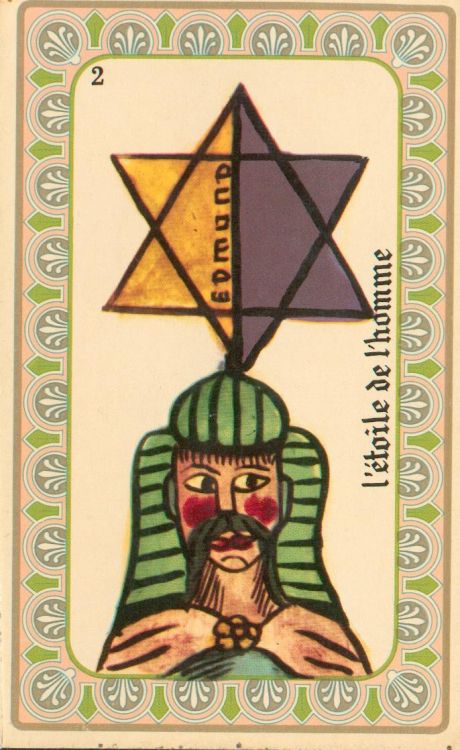 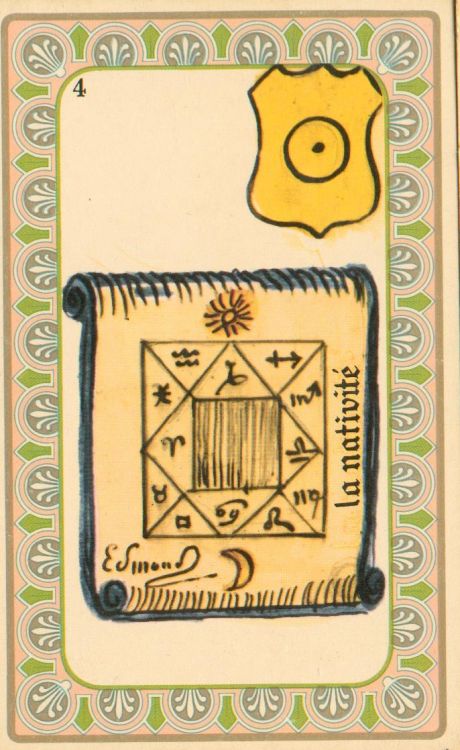 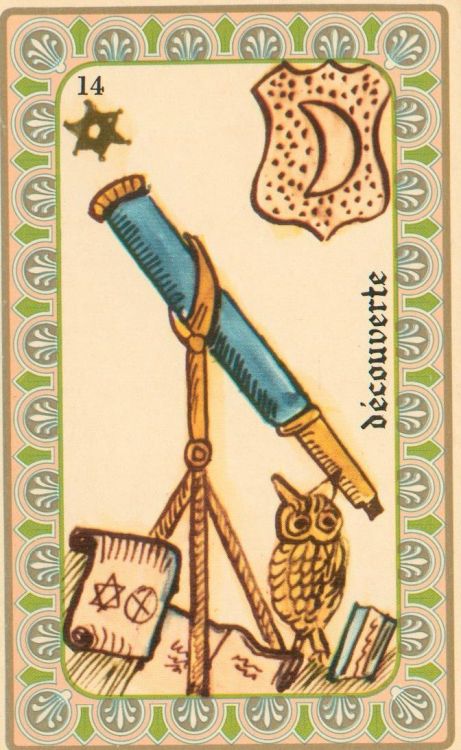 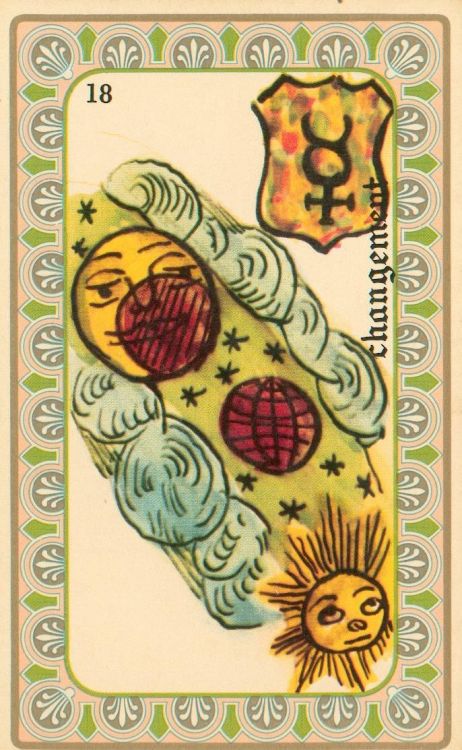 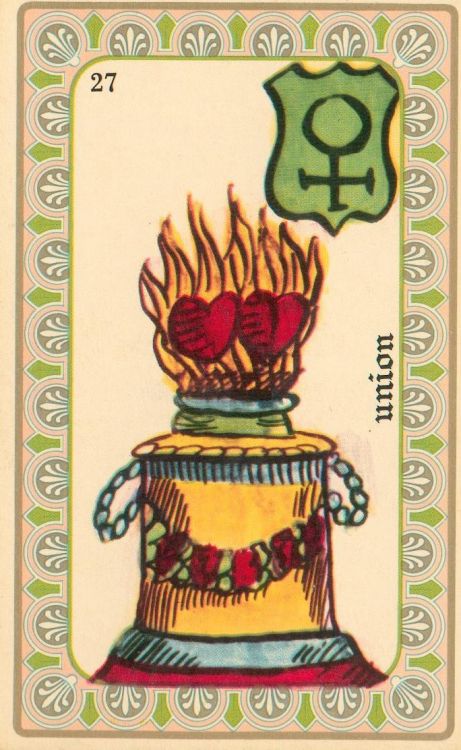 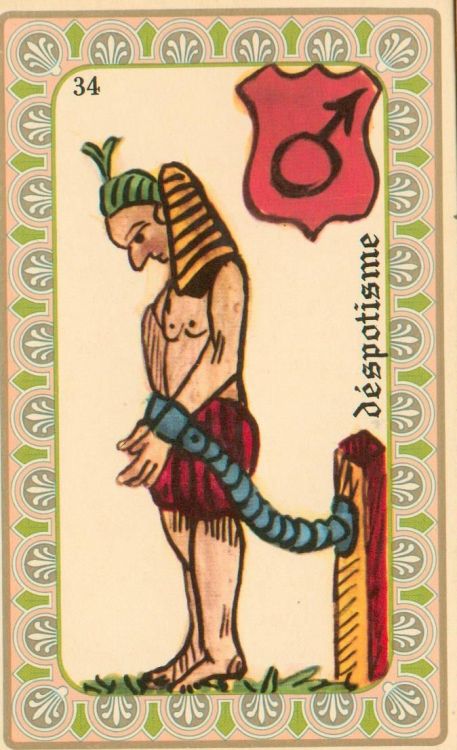 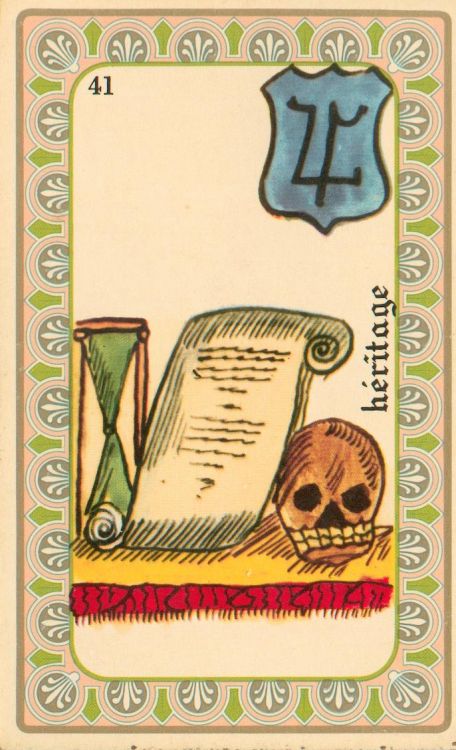 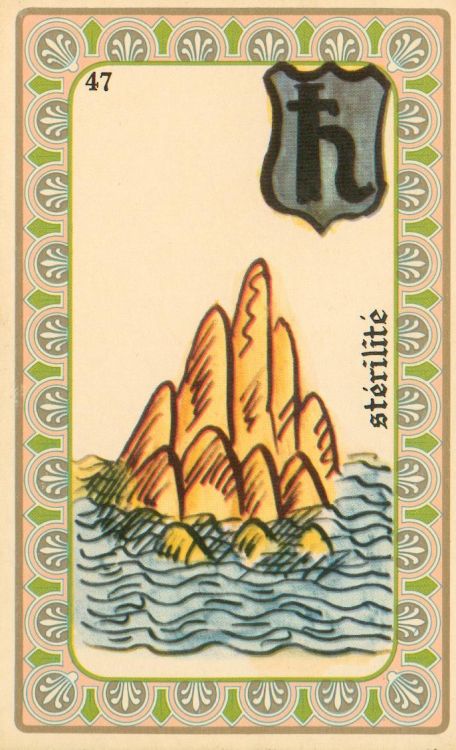 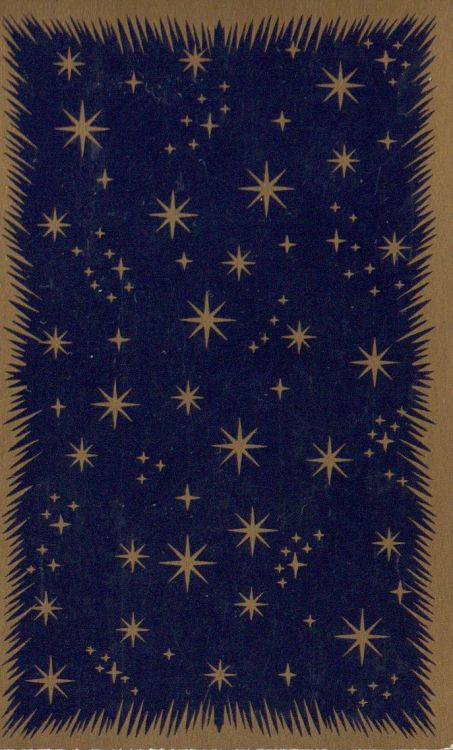 My opinion on Belline’s Oracle

The Belline oracle is presented with a rather old-fashioned design. Even the current version distributed by the publisher Grimaud does not change compared to the 1961 version (edition of this magazine). Some will like this rather vintage look and others will hate it, and will prefer either more modern versions of the same oracle like the one by Gabriel Sanchez.

Despite the above-mentioned inconsistencies in the organization of the cards, the oracle remains truly operational. But let there be no mistake, if it is perfectly adapted to pure divination, prediction, or even to the training of clairvoyant abilities. In my opinion, it is in no way adapted to a psychological approach of the divinatory art. Indeed, the arrangement of the cards according to the astrological planets makes only moderate sense. Edmond ordered his game in a primary way and he polarized it deeply. This conception took away all nuance and finesse that the game could have had thanks to the planetary and astrological approach. An approach that for the blow is more of an esoteric facade than an honest and deep understanding of the creator. But here again, my remarks are set in the present era where psychoanalysis, modern psychology, personal development, psychological tarot have become widely democratized. All these advances did not exist at the time of the magus Edmond. Also we can say that although Belline's oracle has aged, it was avant-garde for the time. Perhaps it is still so ?

The divinatory practice of the Belline oracle can be carried out without reference to the astrological planets. I believe that this is how many use it, relying mainly on the title and illustration of the cards. The reader interested in prediction and clairvoyance will no doubt find a serious, operational, and surprisingly up-to-date tool in the Belline oracle.

The psychological tarot practitioner, having a coaching or personal development approach may not be satisfied with such a tool, compared to the richness and density of a tarot deck. However, any assiduous student of fortune-telling must try all the founding card games. Belline's oracle is clearly one of his few decks.