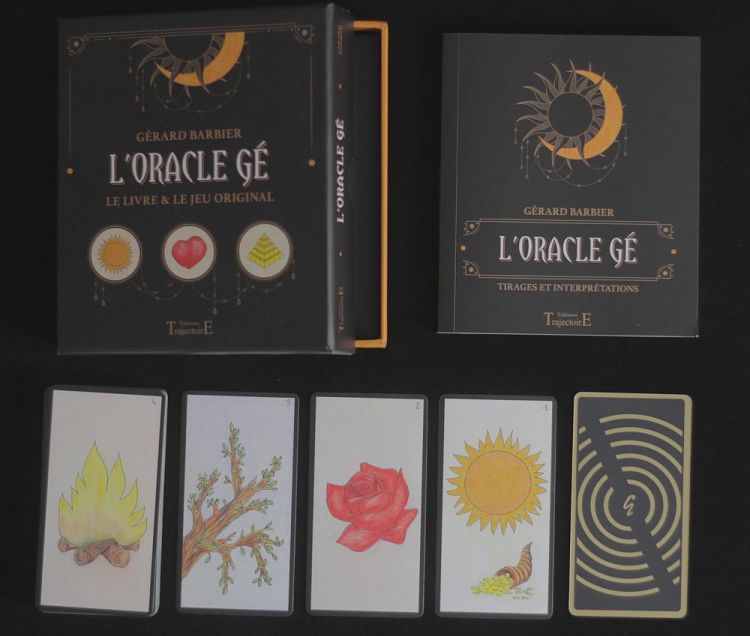 The game comes in a sturdy cardboard box. The cards are plastic-coated and glossy but thin enough. A book wide enough for a very good grip accompanies the cards inside the box.

Created in 1991, the game is composed of 61 cards with illustrations executed in wood pencil giving it a "childish" or "old-fashioned" look. The oracle contains 4 season cards ( 3 - Spring, 24 - Summer, 41 - Winter, 55 - Autumn) which allow to easily specify the time of prediction. There are also 8 character cards: 45 - The young girl, 46 - The young man, 47 - The woman, 48 - The man, 49 - The consultant, 50 - The consultant, 51 - The elderly woman, 52 - The elderly man. The character cards evoke the people in the consultant's entourage or indicate meetings. Most of the cards have only one reading direction (right/upside down) but curiously some cards have different meanings when read upside down or upside down.

The introduction of the book is very brief. The first part only gives some usual tips on how to use your game in the best possible way and informs the reader about the particularities of some cards (with different meanings upside down).

Part 2: Meaning of the cards

Each card is explained in about one page. I like to find a color picture of the card large enough to avoid having to take the deck in my hands. For the cards that are involved, positive and negative meanings are given for both upright and upside down reading. The explanations given are clear. Sometimes examples of card associations are mentioned, but these examples are not systematic for each card. I also regret that no keywords or summaries are available for each card to facilitate their memorization.

Part 3: Drawings of the cards

The book talks about 6 spreads :

As you can see, the spreads are not really aimed at beginners except for the last method. The novice may feel helpless in front of short texts, citing no examples, while there is certainly no lack of space for writing in this book.

This card is one of the few cards with at least two symbols in the illustration to densify its meaning. The illustration with a caterpillar and a butterfly obviously speaks of transformation. It is almost a pity that a chrysalis is not also drawn, because it would have been a reminder that transformation often requires a path with different stages, for example the very active time of growth of the caterpillar followed by a rather passive time (at least in appearance) of inner transformation in the chrysalis.

The tools symbolize work, competence, professional field. In a broader aspect, this card can also represent the construction of one's home, the development of a project. On spiritual subjects, the card speaks of a pragmatic and realistic approach to the situation.

This slide supports my point that a divinatory illustration must include several elements in order to enrich the meaning. This card bears the name "the desert" and shows a ground or a sand dune. The blade naturally evokes sterility, but we can also see a more positive meaning such as stripping, sobriety, the call of emptiness proper to a spiritual search. Aren't we talking about wise men or hermits who took refuge in the desert? Note that it is a pity that this proposition of meaning does not appear in the book.

The author therefore added a second element in the illustration to complete the interpretation of the desert. The faults and cracks in the ground evoke values and certainties as solid as rock that eventually crack. This card therefore also speaks of a test of our ego and beliefs.

This card speaks of moral or physical solitude according to the author. I am almost surprised. For my part, the term "shared" would make me think that we have paradoxes within us, desires that can be contradictory and that must be reconciled in one way or another. This card reminds me a lot of the Major Arcana of the tarot, "6 - L'amoureux" (Tarot de Marseille version, not RWS version) which nevertheless presents a wealth of symbols that this card number 36 does not have.

The author writes surprisingly about this card: "This card alone doesn't mean much". Why create a card that basically means nothing and needs to be associated with other cards to make sense? This seems counterproductive for a divinatory oracle where, in my opinion, each card must have a primary meaning. This card associated with another one, therefore speaks of the unexpected, of what we did not expect or more. Here again, I do not understand the relationship with the numbers 1, 2, 3, 4, 5, 7 in the illustration. Does the missing number 6 therefore speak of the unexpected? I would have rather agreed on a meaning about chance, luck, which is not quite the same theme as the unexpected or good or bad luck.

This card is very strange to me. First of all it necessarily announces a problem on the road. I find that it is trying to push an open door. If we feel the need and we take the time to do a divinatory practice, it is because we are in full doubt. We need answers to questions arising from an uncomfortable or problematic situation. Also, I hardly see the point of creating a card signifying that there is a problem on the way, when the consultant already knows it, that's why he draws the cards !

Again, this card is a surprising approach to the creator. Indeed, this slide is neutral, and only serves to reinforce the good or bad predictions of the neighboring cards. As a practitioner of Psychological Tarot, I would tend to object that the fate of the consultant remains in his hands, and that it is unwise for a card to be used only to confirm a prediction, as if the deck indicated that the predicted event was bound to happen, regardless of the words and actions of the consultant. This card indicates the obsolescence of a game that was created almost 30 years ago when divination practice at the time was still very much focused on clairvoyance and prediction.

Moreover the author writes: "it is possible that you use music therapy or get involved in automatic writing". If I hear that one can talk about music therapy, however how can a harp and a mask lead to talk about automatic writing? The author adds "In this last area, however, be careful not to bring bas-astral entities to you". Is this book really the best place to talk about spiritualism ? Should the reader be concerned with esoteric considerations that have nothing to do with consulting an oracle ? 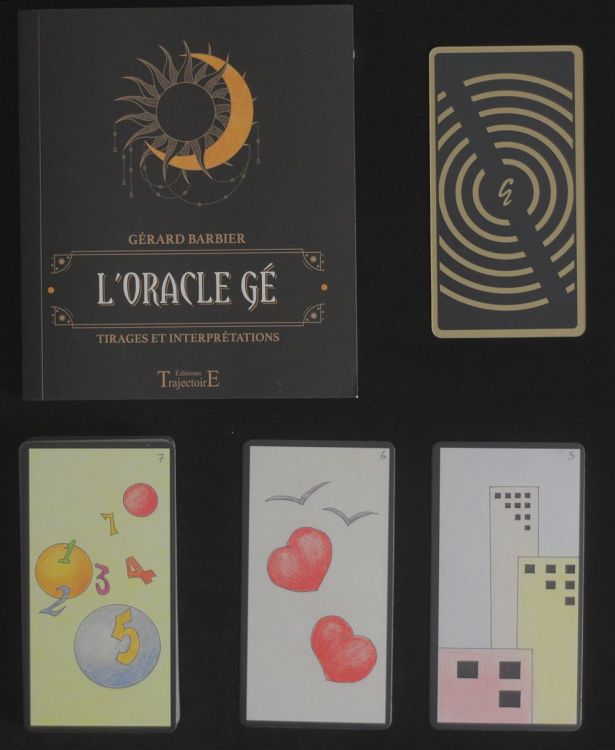 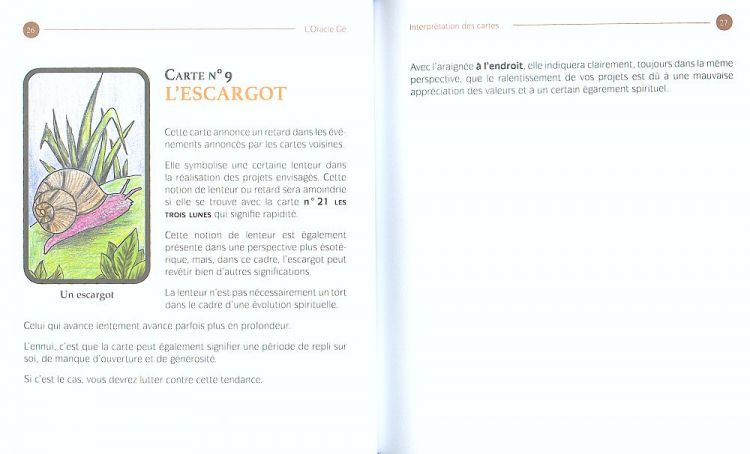 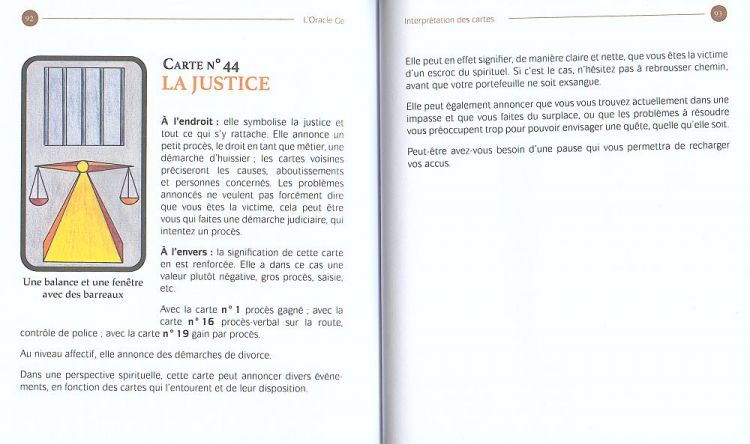 Part 2: Meaning of the cards 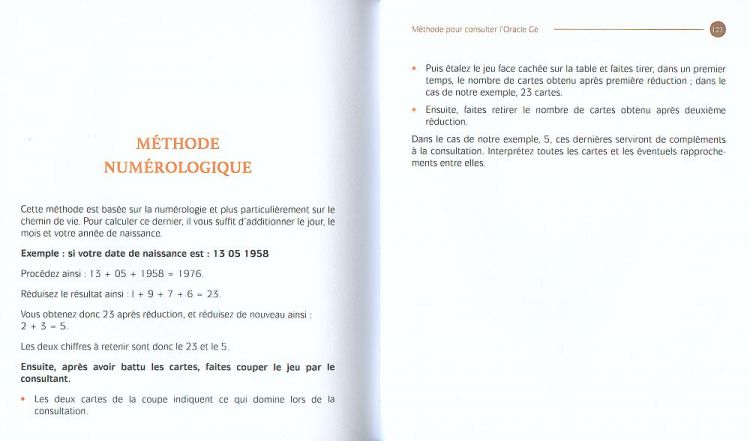 Part 3: Drawings of the cards 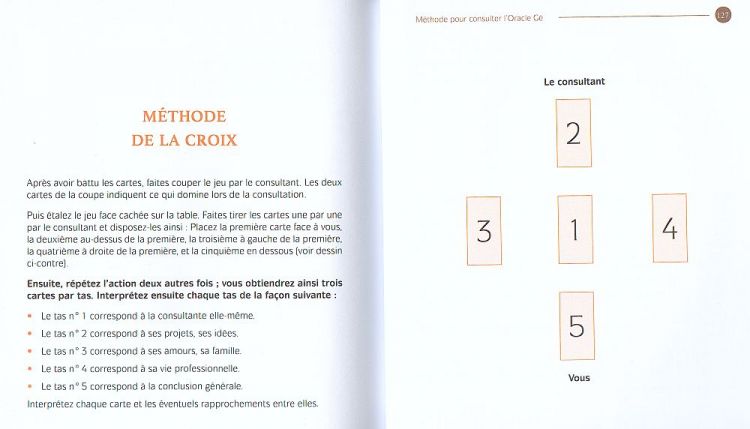 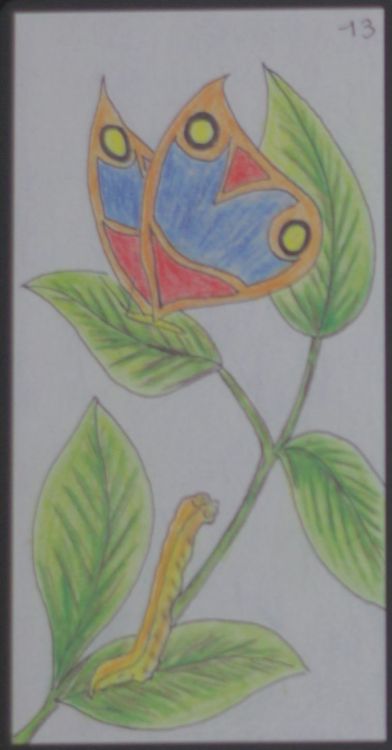 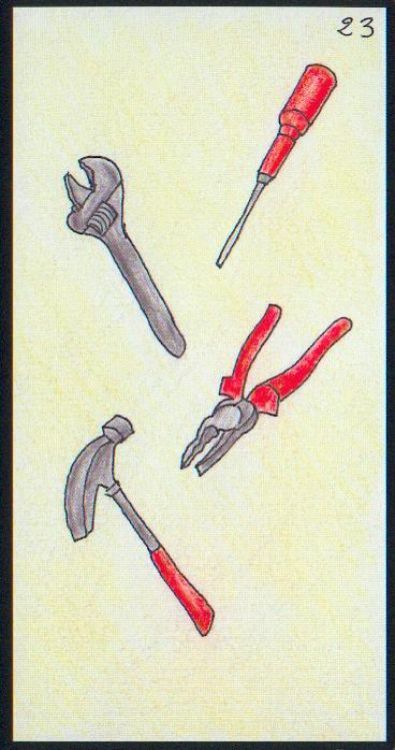 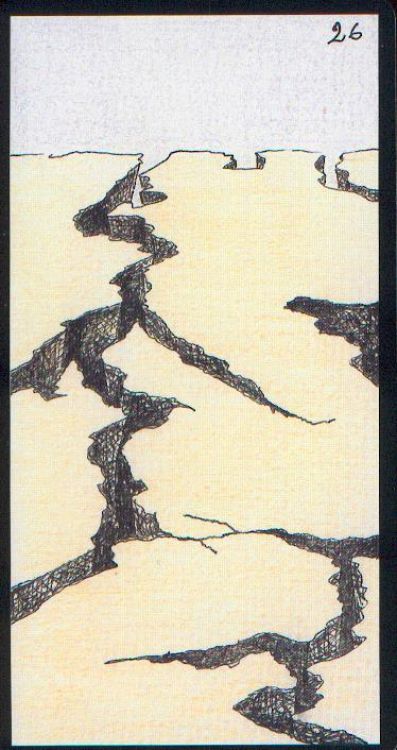 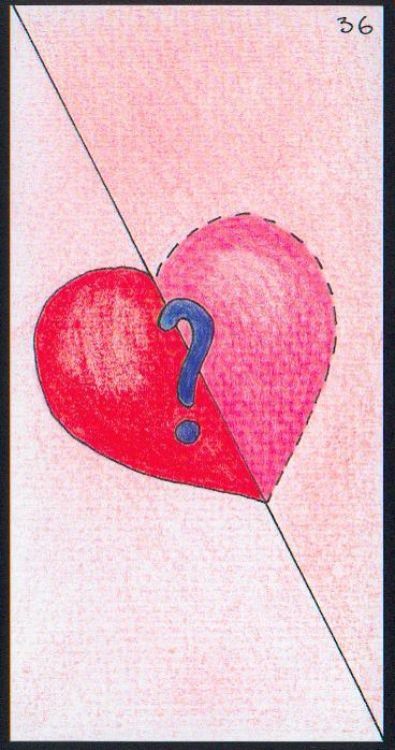 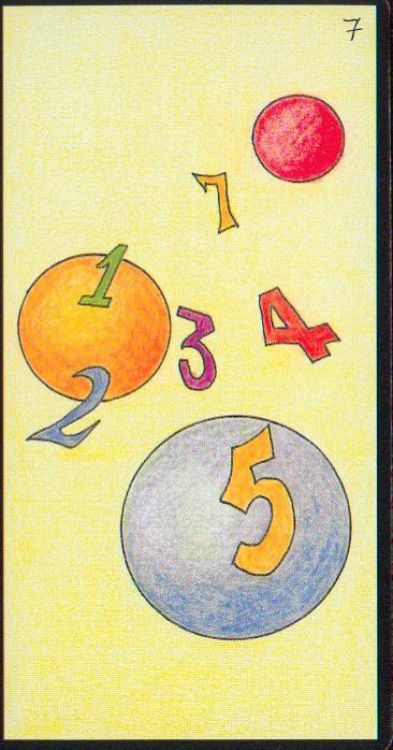 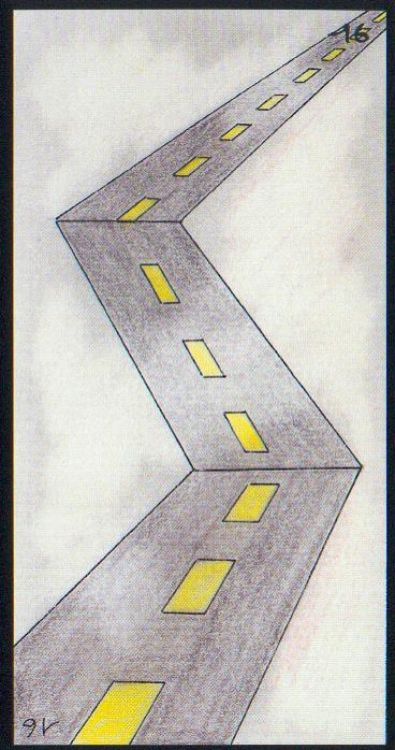 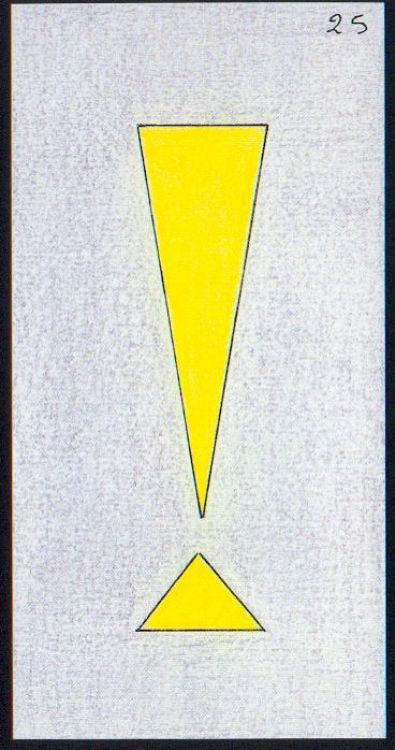 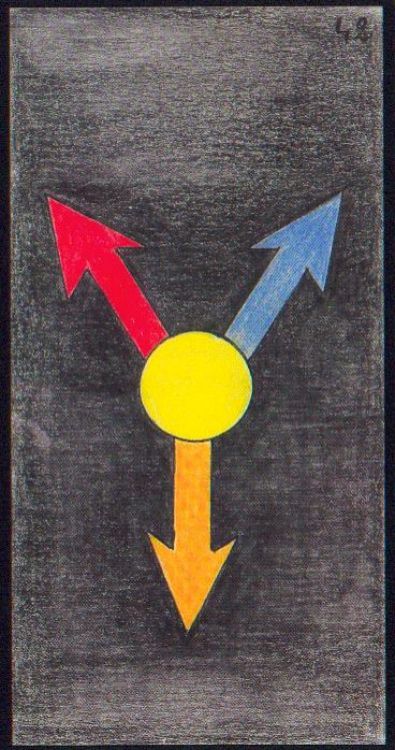 BACK
GALLERY
SHOW ALL oracledos
15 - The Sexual symbols 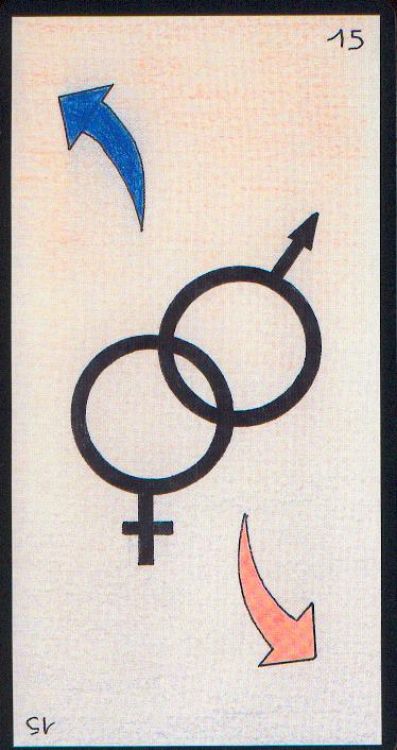 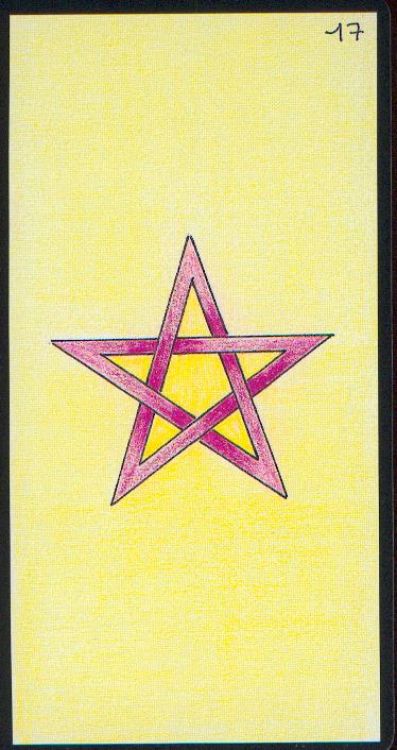 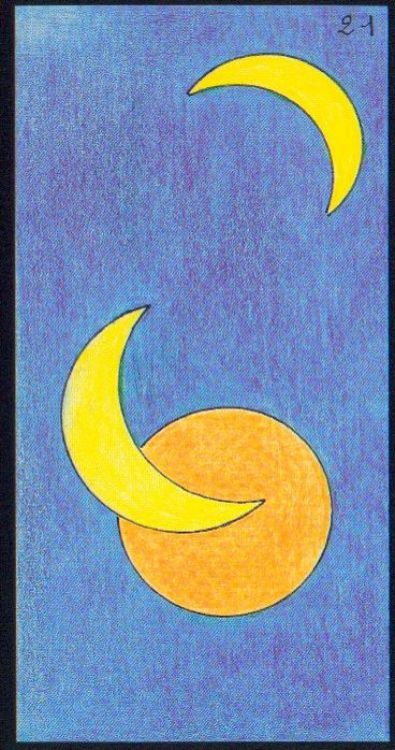 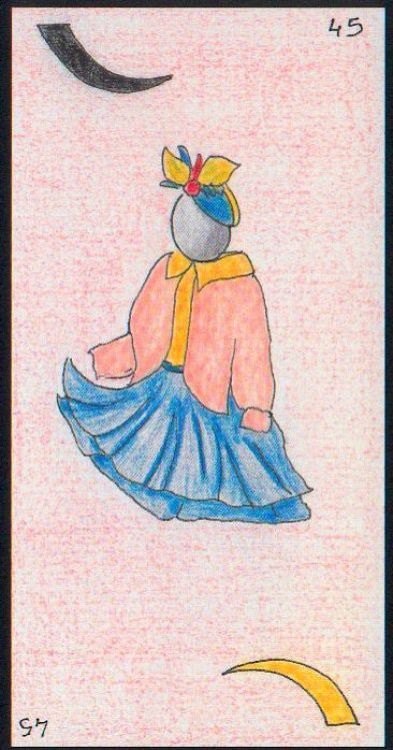 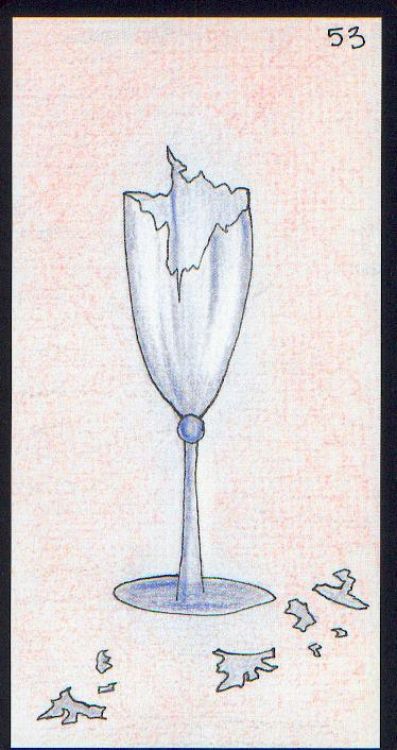 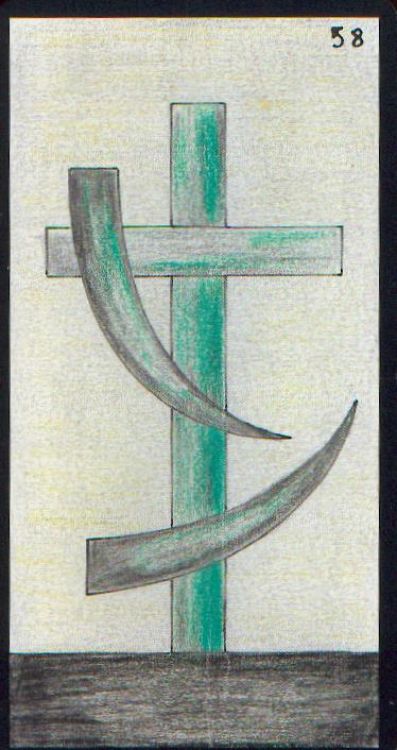 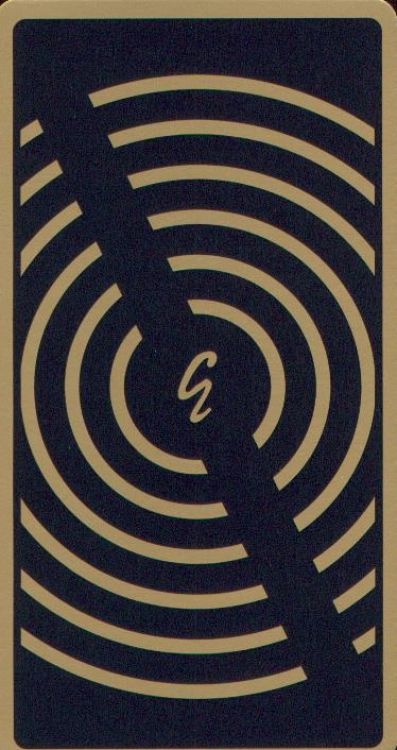 My opinion on Gé Oracle

Concerning the graphics of the cards, after the surprise of having illustrations made with a simple wooden pencil (we like or not), we notice that the symbolism used is rather simple and refined, which makes the game accessible to beginners. However, there is a balance to be found between a graphic design loaded with symbolism or with ambiguous or diverted symbols and a graphic design with a single symbol without any additional details to enrich or nuance the meaning of the card. I am not sure that the author has achieved this balance in his deck.

The most unfortunate thing in this edition is the book that is not well written. The explanations on the cards may be clear, but the book as a whole, as well as the game, is not designed to facilitate learning. The cards have a name on them but it is not on the cards, no keywords are given per card. Too few card associations are explained. The most disappointing part is undoubtedly the spreads, which are too synthetic, assigning no role to the locations (which would make the spread accessible to novices) and providing no examples.

The Ge oracle seems designed primarily for clairvoyance and predictive use and not for psychological spreads even if it is possible to do so. Despite the modernity of the game (created in the early 90's) I am not sure that it adds any real added value compared to much older games like Lenormand, even if it is true that its images are clearer than the Belline system. I hear that this game was first and foremost a creation of the author for his personal use, before it was published. Also the creator's approach having been to create a very personal tool, everyone will make his own opinion on the interest he will have to use this oracle.

In summary, I do not recommend this edition for beginners because of the book which seems to be the result of a careless work. Experienced practitioners may find better alternatives in other modern games such as the Oracle of the Triad.