The game comes in a soft cardboard case. The cards, which are quite small in playing card size, are satin and shiny. A small booklet fits in the box.

The history of the game

Miss Lenormand's story is well known, there is even a Wikipedia page about her life. Marie-Anne-Adélaïde Lenormand was born in 1772 from a rather humble social rank. From childhood, she showed great imagination and curiosity, sharpened by a lively mind. She was sent to the Royal Abbey of the Benedictine Ladies of Alençon, where she began to make predictions. The perspicacity and veracity of these omens made her noticed at the abbey but also sent back. At the age of 21, she went up to the capital during the French Revolution, where she opened a bookstore that became a clairvoyant's office. She knows her first successes before being suspected then locked up by the Comité de salut public. Quickly freed, she managed to make her way through the times, crossing eras and taking advantage of establishing her prestige and her fortune with each change of regime, the Empire under Napoleon and then the Restoration with Louis XVIII. Did she really have a gift for clairvoyance ? Perhaps. However it is sure that she was gifted with a great finesse of mind in the game of intrigues, knowing how to seduce her clientele. Finally, she certainly had a true sense of business. Some specialists allow themselves to think that she had built a real network of informers in the whole of Paris, allowing her to be well informed about her clients and to make her predictions accordingly.

However, we have very little information about the game or games she used for her consultations. It is however commonly accepted that she drew with a deck of playing cards with French signs (Clover, Spades, Heart, Diamond) on which she wrote divinatory annotations. She could have been inspired by the divinatory card game of the German Johann Kaspar Hechtel (1771 - 1799) whose 36-card deck known as "Das Spiel der Hoffnung" (The Game of Hope) was first published in 1799. However, it is more likely that Marie Lenormand drew her inspiration from Eteilla's deck of cards. Indeed, on her arrival in Paris, Marie Lenormand met a fortune-teller named Mrs. Gilbert. The latter taught her divination through the divinatory tarot of Etteilla (1738 - 1791). The latter saw his tarot printed and published for the first time in 1788-1789.

The booklet has 3 translations, in German, English and French. Each translation covers about 20 pages. After a very short preface relating the life of Miss Lenormand, the booklet essentially covers the meaning of the cards.

Part 1: Meaning of the cards

For each card, a meaning is given through a short paragraph, sometimes evoking a nuanced interpretation through the association of other cards. The explanations are clear even if naturally they only talk about the essential.

The booklet offers two methods of printing in the space of two pages. The description reminds me of the classical methods of printing with Lenormand. However, I am not sure that the explanations are clear enough for a beginner to understand the two printing methods by himself, if he has not learned them elsewhere. A translation error has crept into the booklet, since the picture describing the second print is in German in both the English and French versions. This kind of error is very common in this type of booklet.

In fact, owning other Lenormand games like "Gilded reverie" by Ciro Marchetti. Thanks to the Piatnik, I was able to consider what could be the divination as operated by Miss Lenormand (for reminder of simple key words written on playing cards in French signs). Here, each card has two images, one inserted into the other. In the upper square, one recognizes the original playing card with the suits of the 4 suits Spades, Club, Diamond and Heart. In the lower part of the image, an illustration evokes the meaning of the card. It must be admitted that card illustrations, even if they are pleasing to the eye, do not bring more elements and density than a simple keyword. Whereas Ciro Marchetti's game offers a real extra meaning thanks to his worked out images with complementary details.

In this card, the clover with 4 leaves instead of 3 is seen as a source of happiness and luck. Unfortunately, the image is not more explicit. No other element in the image enriches the meaning of the card.

The birds in this version of Lenormand are flying. The original divinatory meaning of the card speaks of news and communication. However, with this illustration, I prefer to see a spirit of freedom and travel. But it must be understood that in Miss Lenormand's time, her wealthy clients were probably more sensitive to news, rumors and gossip than to freedom and travel. The symbolism of birds is vast beyond cultures and eras, and especially specific to each species according to its physical or behavioral characteristics. This is probably the limit to illustrate a card with only one emblematic symbol.

The child's card is undoubtedly one of the most meaningful and evocative cards in the game. Indeed, we see a young girl in full action, playing with a hoop. Her princess clothes and the game she is having fun at, refer to the pleasures, memories and sweetness of life. 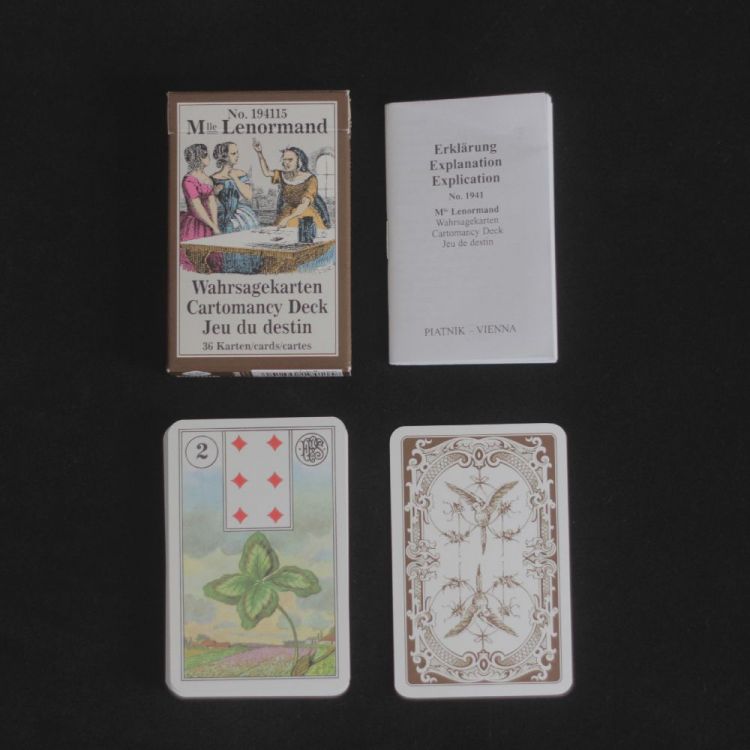 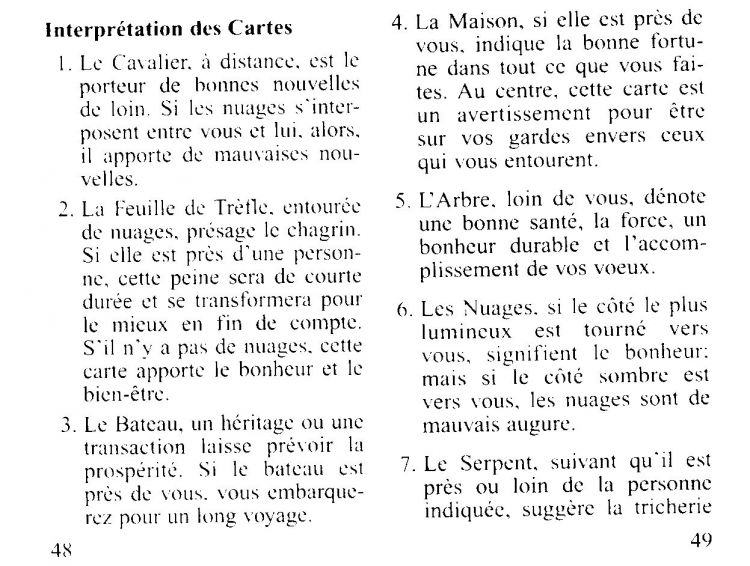 Part 1: Meaning of the cards 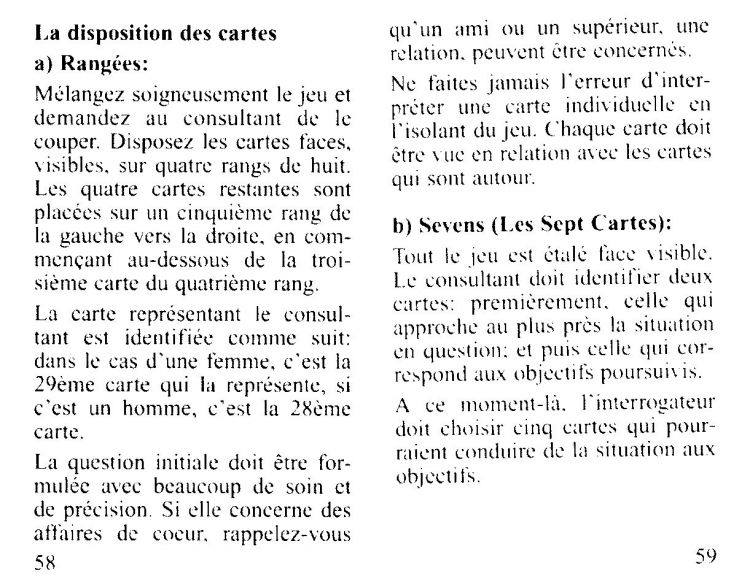 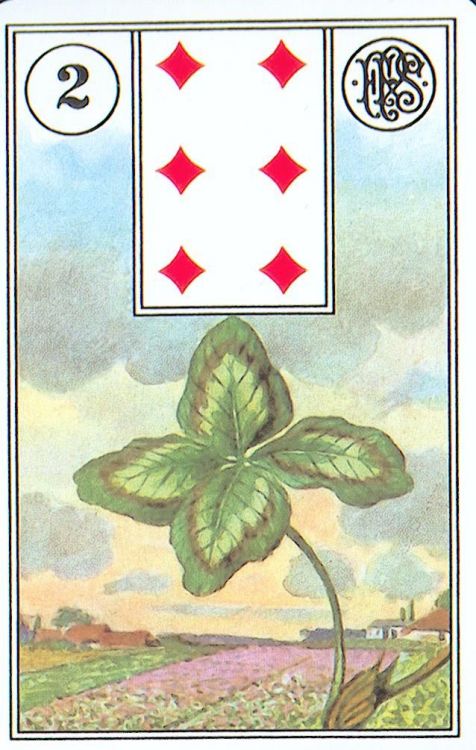 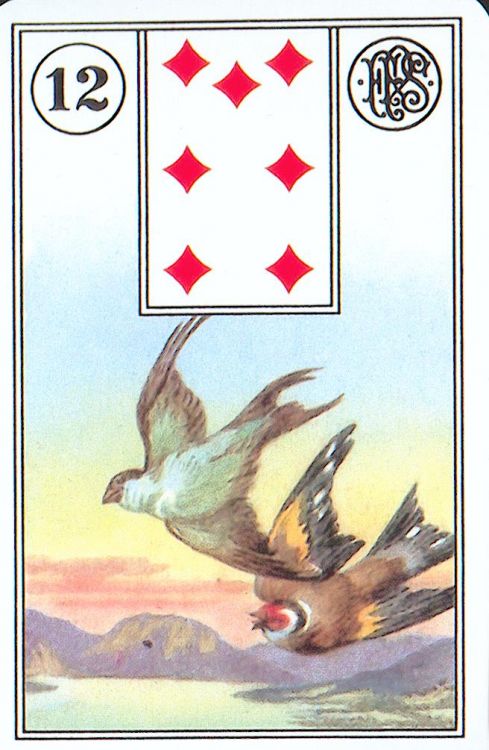 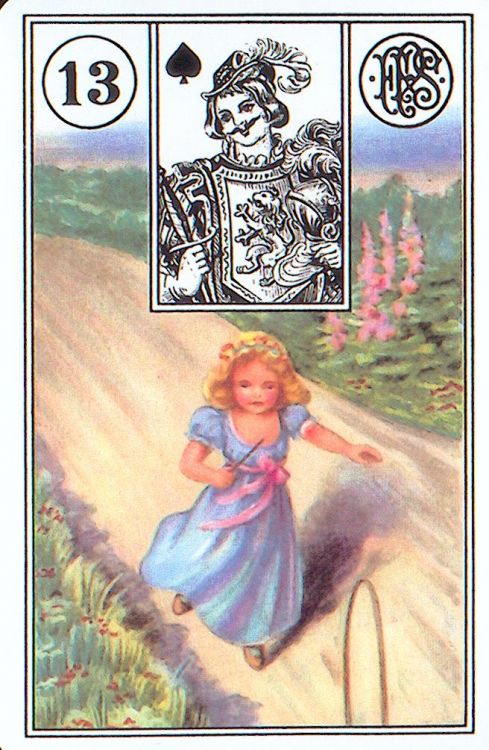 BACK
GALLERY
SHOW ALL oracledos
3 - The Boat 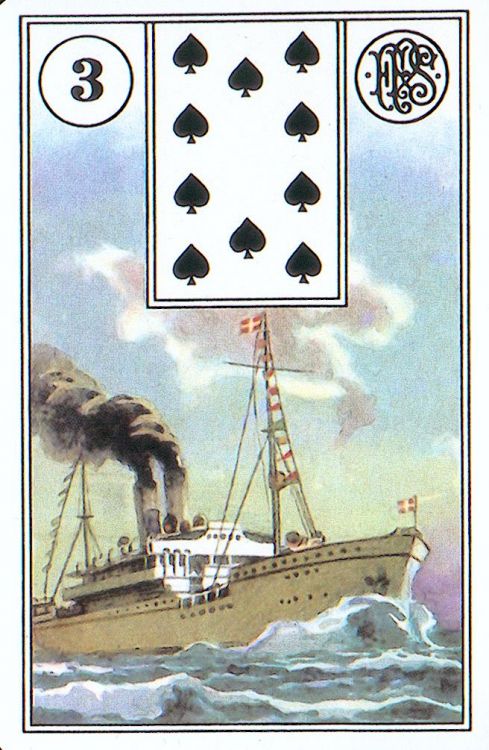 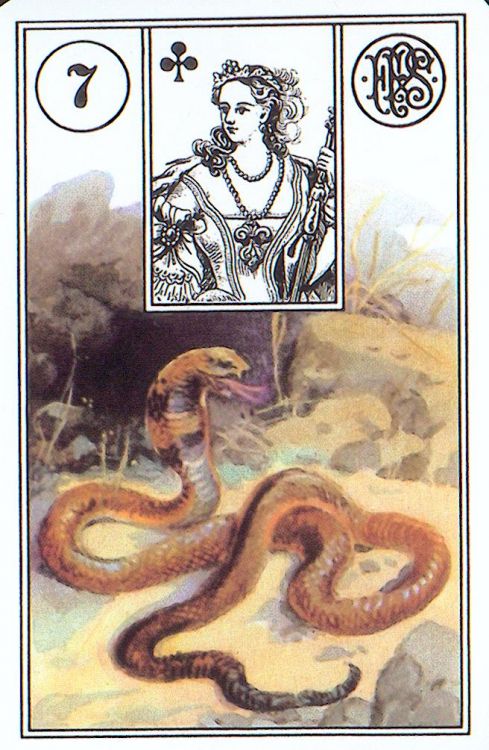 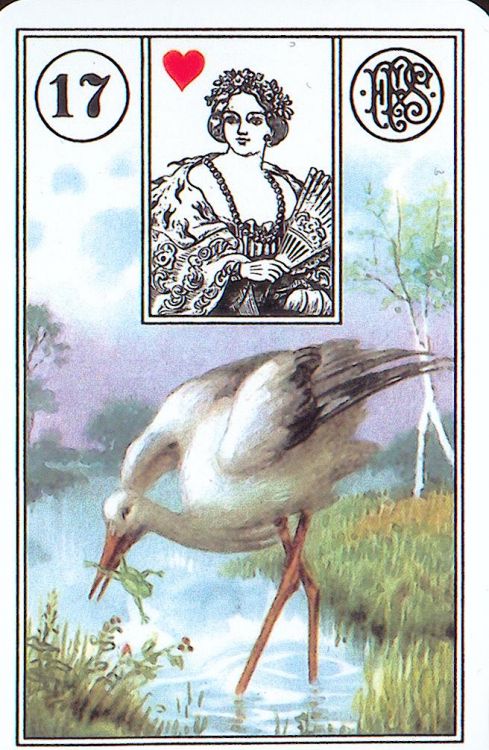 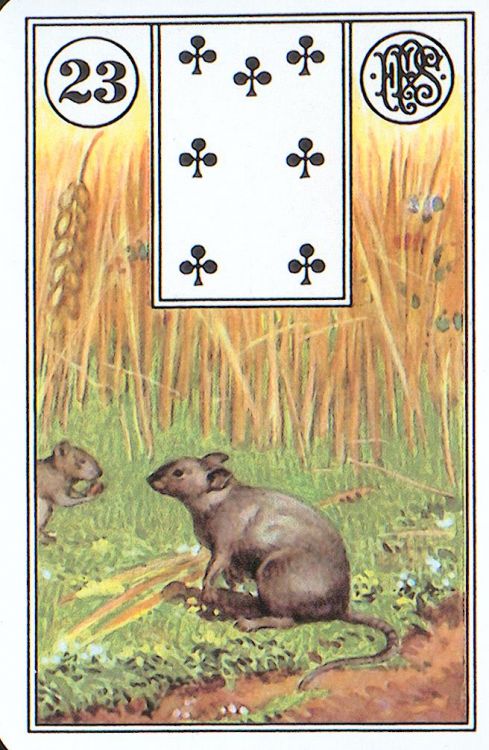 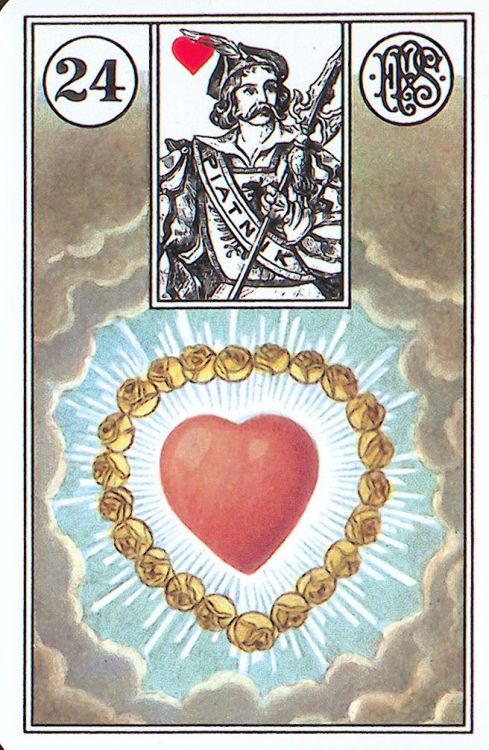 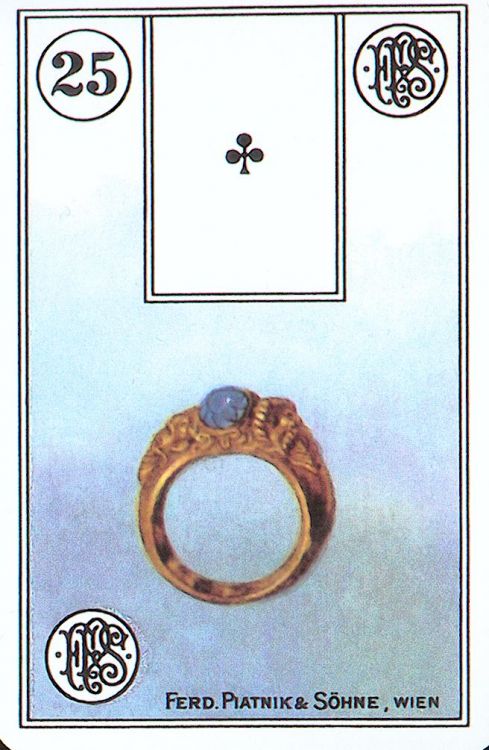 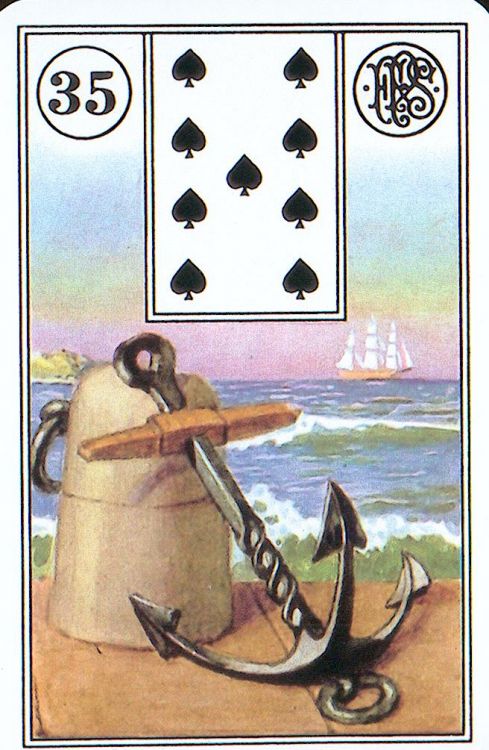 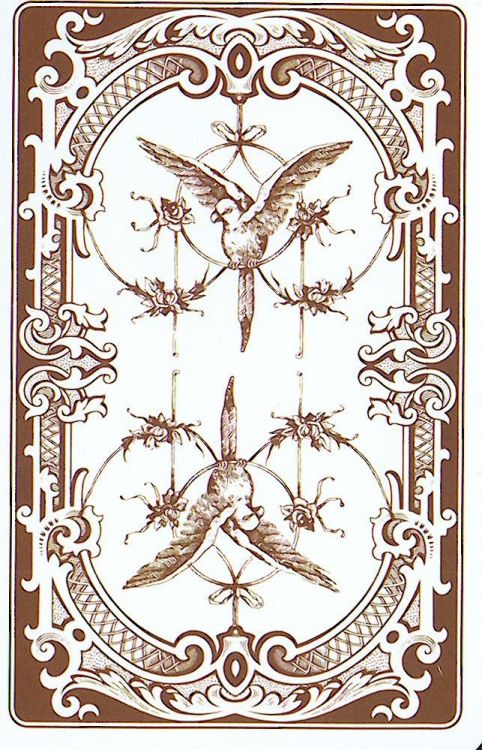 My opinion on Piatnik Lenormand

This game is perhaps the most faithful or let's say the most neutral with regard to the system designed by Miss Lenormand. Indeed the illustrations represent the keyword of each card in its simplest expression, even if the images are beautiful and stylish. Also, it can be difficult to appropriate this game because the illustrations stimulate the imagination rather little. The reader will therefore need to have a bold improvisation to get the most out of this game. Thus, a neophyte interested in the Lenormand system may prefer other games with richer illustrations, making it easier for the imagination and associations of ideas. In this regard, it is possible to consult the review of "Gilded reverie" by Ciro Marchetti.